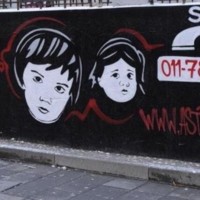 This mural was created to make the ASTRA hotline number more widely known in Belgrade, Serbia. Marija Andjelkovic, who works for the anti-trafficking organisation, had the idea after she saw an empty wall. After much work with the city officials, the mural was created by Kraljica Vila (TKV).ASTRA was established in 2000 and was the first anti-human trafficking organisation in Serbia. It deals with all forms of trafficking and modern slavery, focusing on direct victim assistance. They work towards the reintegration of survivors, prevention, education, public awareness raising, research and network advocacy at a strategic and operational level. They also support the building of a functional and efficient counter-trafficking system that fully respects the survivors rights.Their SOS Hotline and Direct Victim Assistance Program was launched in March 2002 and allows the public/survivors to report instances of human trafficking and modern slavery. Initially the hotline was designed to be preventative, but within a month the organisation widened its scope after receiving calls about exploitation. The hotline provides victim assistance and continues to have a preventive role by offering the public information on safe migration, employment and education outside of Serbia, as well as legal advice. By February 2017, the hotline had received more than 34,000 calls from 5370 people and of these 499 people were identified and/or freed from their exploitation.Unfortunately the mural has since been painted over by city officials.