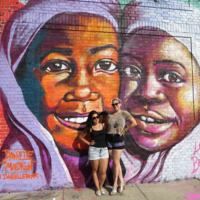 This mural was created by graffiti artists Danielle Mastrion and Lexi Bella as part of the 2014 Welling Court Mural Project. This project began after members of Welling Court community met at Ad Hoc's Bushwick gallery and invited Ad Hoc Art to come up with a vision to beautify their neughbourhood. With the community's support, the first mural was created in December 2009 by M-City. The rest of the winter was used to plan the launch of the first multi-block mual project that occured in May 2010 with over 40 murals. With a mix of artists and new talents, the Project hosts over 140 murals by artists from around the world and it is one of the best collections of contemporary street culture.This mural supports the Bring Back Our Girls campaign, which is fighting to save the 276 Chibok schoolgirls who were kidnapped by Boko Haram on 14th April 2014. #BringBackOurGirls calls for the Nigerian government to secure the release of the 113 girls who are still missing. To learn more about the campaign, click here.