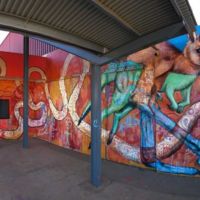 This mural was created by Joel Artista and Max Frieder in collaboration with Artolution, Tangentyere and Baker Institute. Artista and Frieder worked with indigenous communities to create the piece and raise awareness of issues facing these communities, including human trafficking. Indigenous youth and elders took part in creating the colourful mural and came up with ideas for the piece with the artists. It was part of Artolution's project to create 400 art projects around the world to raise awareness of human trafficking.Joel Artista (Joel Bergner) has completed several murals against human trafficking and modern slavery. He is an artist, educator and activist who is celebrated for his antislavery artwork and murals. Artista's art is heavily influenced by his work with communities and non-profit organisations, and in 2015 he joined forces with Max Frieder to form Artolution. This community-based arts initiative empowers artists, youth and communities to be agents of positive social change and explore critical societal issues and create opportunities for constructive dialogue.