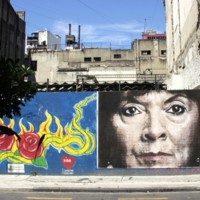 This mural is a portrait of Susana Trimarco and raises awareness of human trafficking and forced sexual exploitation. Trimarco’s daughter, Marita de los Angeles Veron, was kidnapped in Tucuman in 2002 and forced into prostitution in La Rioja. Trimarco took matters into her own hands when she suspected that the police and government officials were not doing all they could do find her daughter. She has personally led 10 searches to find her daughter by going undercover as a prostitute in bars that doubled as brothels in La Rioja. She found the phone numbers of people she believed were involved in sex trafficking, tracking them and setting up meetings to help free the girls that were being trafficked. Trimarco has survived two murder attempts because of her efforts to infiltrate sex trafficking rings and her undercover efforts have led to the rescue of 150 trafficked girls, some as young as 12 years old. In October 2007 she set up the Fundacion Marita de los Angeles to help survivors of sex trafficking – the organisation provides free legal, psychological and social support to survivors and their families. In 2008 her lobbying efforts led to human trafficking being made a federal crime in Argentina.In February 2012, 13 people, including former police officers, were put on trial for allegedly kidnapping Marita and holding her as a sex slave in brothels. In December 2012 they were acquitted of this crime as the court ruled there was no way to prove that Marita had been kidnapped and forced into prostitution. This verdict led to protests across Argentina and the three judges were accused of corruption by the public. This mural was created in January 2013 to raise awareness of Marita’s case, Trimarco’s activism and the severity of sex trafficking in Argentina.