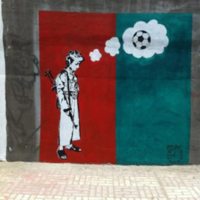 This piece is part of a series of murals led by the artist and activist Murad Subay, which was launched on 4th July 2013. The project discussed twelve political and social issues affecting Yemeni society, such as treason, corruption, civil war and child soldiers. Unfortunately many of the murals were vandalised after their completion. The murals were painted over a year and the artist painted a different topic each month. The murals created for '9th Hour' focused on the recruitment of children as soldiers and highlighted how many children are torn away from their families to die for a cause they don't understand. This mural shows a child soldier with a machine gun over his shoulder. He is looking down at the floor and a thought bubble shows that he is thinking about football, rather than being a soldier.