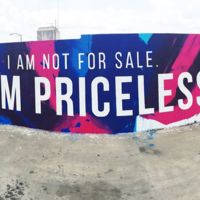 I Am Not For Sale. I Am Priceless

This mural was part of an initiative funded by The Junior League of Tampa, who seek to end human trafficking by spreading awareness of the issue in the Tampa Bay area. The mural includes the telephone number of the Human Trafficking Hotline and is located at the busy Greyhound bus station to raise awareness of the trafficking that happens in Tampa. The project was led by Nicole DeLoach (Juniour League of Tampa), artist Leon Bedore, along with the support of the City of Tampa Arts Department, survivors of modern slavery, community activists and the Tampa Police Department. The reveal of the mural was attended by the Attorney General Pam Bondi, who is the Chair of Florida's Statewide Human Trafficking Council, and Becca Stevens, founder of Thistle Farms, a charity that supports female survivors of trafficking, prostitution and addiction. Subsequently the mural has been printed onto posters and flyers which have been placed onto the city's buses.