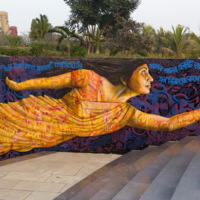 Together We Can End Human Trafficking

This mural was created by Joel Artista in collaboration with Artolution, Meridian International Center, Shakti Vahini and the US Consulate in Kolkata. It raises awareness of modern slavery in West Bengal and hopes to educate people on human trafficking and enlist their help to end slavery.The piece was part of 'Shanti Arts for Action' by Artolution, a community-based public art organisation that seeks to ignite positive social change through collaborative art making. This project engaged young people in slum communities, street children, those in drug rehabilitation and survivors of human trafficking. The mural was inspired by a photograph that was taken by Brooke Shaden when she worked with Kolata Sanved, an organisation that helps survivors of trafficking with dance therapy. Shaden partnered with the women and the girls to create a series of photographic self-portraits in which they each chose a pose that they felt represented their stories. Sangeeta portrayed herself having her ankle gripped by a menacing hand, while she reached toward another hand for support. When Kolata Sanved collaborator Laura Price showed Artista this photograph, he was moved by the image and the story behind it, and received permission to use it as the central figure in the mural.The sari of the main figure depicts many of the main issues around modern slavery along with images from Bengali folkloric art. On the opening day of the International Anti-Human Trafficking Conclave there was an event, with dancers who are survivors of trafficking. This mural and the events surrounding it place survivors at the centre of their efforts.Joel Artista (Joel Bergner) has completed several murals against human trafficking and modern slavery. He is an artist, educator and activist who is celebrated for his antislavery artwork and murals. Artista's art is heavily influenced by his work with communities and non-profit organisations, and in 2015 he joined forces with Max Frieder to form Artolution. This community-based arts initiative empowers artists, youth and communities to be agents of positive social change and explore critical societal issues and create opportunities for constructive dialogue.