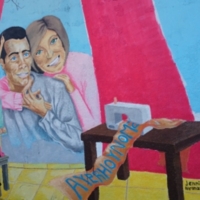 This mural in Buenos Aires was part of a series organised by Red Mundial Juvenil Argentina, Vínculos en Red and Art Emprende. Painted in a small square Plaza la Victoria, the murals depict different kinds of violence, abuse and exploitation that children and teenagers suffer. On 19th September 2015 an event was held to unveil the murals, with artistic and recreational workshops about child abuse and the maltreatment of children.This mural highlights how children who live in poorer households and rural areas are more likely to be victims of child labour, where they are open to exploitation and abuse. The image of a girl at a sewing machine emphasises how millions of girls and women are forced to be domestic workers, with little to no pay and no opportunity to leave.