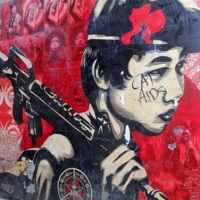 This piece was part of a series of murals created by Shepard Fairey (Obey Giant) under the installation project of the Irvine Contemporary Art Gallery, with other artists including EVOL and PISA73 from Berlin, Gaia and Oliver Vernon from Brooklyn.It shows a Cambodian child holding a machine gun over his shoulder, with a flower in his hair highlighting his youth and innocence. The artist created another piece that protested against child soldiers called 'Duality of Humanity' at 4 Pike Street, Cincinnati. This mural was soon destroyed by the building's owner and the above mural no longer exists either. 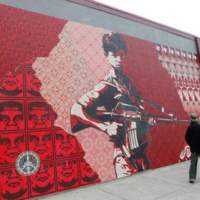 This mural of a child soldier was created by Shepard Fairey (Obey Giant), the artist who is famous for creating the iconic Obama HOPE poster. The image draws parallels between the complex emotions around the Vietnam War and the invasion of Iraq. While it does not focus on modern slavery, it includes an element of modern slavery in the form of a child soldier.There was a great amount of controversy surrounding this mural. Michael Claypool, the building's owner, did not review the piece before it was placed onto his wall and he was shocked when it was unveiled. Claypool commented that he felt it was offensive and he hired painters to cover the mural in white paint. Many felt the mural was inappropriate considering it was opposite the John G. Carlisle Elementary School.Shepard Fairey admitted that he did not know that the mural was opposite a school and stated that had he known of the school's presence, he would have altered the piece. However the artist defended his work and commented that he felt it did not encourage violence, but rather did the opposite. The artist created another mural against child soldiers in 2011 as part of the Irvine Contemporary Art Gallery project in Washington D.C.