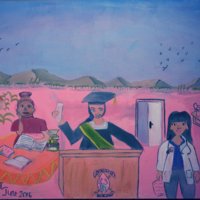 This piece was part of a series of murals created in 9 countries across Africa. The #WallsCANBloom campaign was launched by the Government of Canada in 2016, whereby the government committed $80 million to ending early and forced marriage in Africa.The murals were created on or around 16th June 2016, which is the International Day of the African Child. Local artists, activists, NGOs, schools and communities were involved in the design and execution of the murals. The pieces were displayed on the buildings of Canadian embassies and High Commissions and unveilings of the murals were accompanied by speeches and events. The campaign had a strong presence on Twitter with #WallsCANBloom.This specific mural was created by Tladi with children from Soshanguve Seconday School. In one scene, a girl sits below a tree reading a book and there is a heart with the phrase 'love education' in it. In another scene, there is a portrait of a girl with a graduation cap on and a second girl is accepting a degree in a graduation cap and gown. There are also women reading texts on the left hand side of the mural and women as doctors on the right.