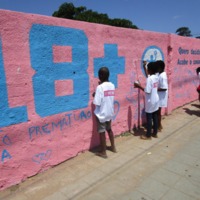 This mural was created as part of Plan International's campaign '18+: Ending Child Marriage in Southern Africa' to raise awareness of the negative aspects of child and forced marriages. A ‘Pinkification’ campaign occurred in Maputo, Maxixe and Inhambane whereby pink billboards, buses and murals appeared throughout the cities. Children were invited to take part in the mural and paint the message 'I want to decide my own future; say no to child marriage'.With this campaign, Plan International aimed to empower girls and challenge gender norms and practices that drive child/forced marriage. The project included workshops with communities to promote education and training sessions for government representatives, schools, etc. on sexual and reproductive health rights. Plan International, which works to protect the rights of children, launched this campaign to fight for girls’ rights and gender equality. It is a youth-led, global movement that supports girls to take the lead and influence decisions that matter to them. The charity works on forced and child marriage throughout the world.