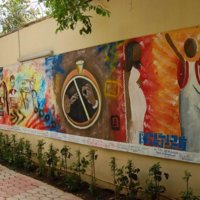 This piece was part of a series of murals created in 9 countries across Africa. The #WallsCANBloom campaign was launched by the Government of Canada in 2016, whereby the government committed $80 million to ending early and forced marriage in Africa.The murals were created on or around 16th June 2016, which is the International Day of the African Child. Local artists, activists, NGOs, schools and communities were involved in the design and execution of the murals. The pieces were displayed on the buildings of Canadian embassies and High Commissions and unveilings of the murals were accompanied by speeches and events. The campaign had a strong presence on Twitter with #WallsCANBloom.This specific mural was created by artist ANW-KO'ART with the local community and has several different scenes protesting against early and forced marriage. In one scene, there is a girl being forced to wear a wedding ring, and elsewhere a pregnant girl watches another girl go to school, with the latter celebrating her access to education. At the start of the mural is the phrase 'give me the time to realise my ambitions', with girls holding signs that state 'no to early marriage', 'we want to survive' and 'our studies'.