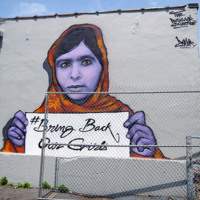 This mural was created by Zimmer as part of the Bushwick Collective, New York City's most prolific neighbourhood for street art and graffiti. The piece supports the Bring Back Our Girls campaign, which raised awareness of the kidnap of 276 Chibok girls in Nigeria on 14th April 2014. Many of these girls were sexual exploited and forced into marriage.As of 2018, 57 girls managed to escape, 107 were released, and 112 are still missing. The campaign is demanding that the Nigerian government rescue the remaining girls and reunite them with their families.This mural shows Malala Yousafzai holding a sign with 'Bring Back Our Girls'. The Nobel Peace Prize Winner, who campaigns for girls to have access to education, supports the campaign and called for the Nigerian government to do more to save these girls. Unfortunately the mural is no longer at the location as of September 2017.