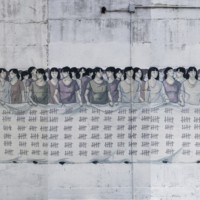 Elimination of Violence Against Women

This mural was created by street artist Hyuro as part of a series of pieces that celebrated the International Day for the Elimination of Violence Against Women on 25th November 2013. Hyuro is one of many artists who took part in the Memorie Urbane in Italy.This concept began in 2011 when Davide Rossillo, the president of creative tourism, had an idea about bringing contemporary art practices into the open space to create an open-ait museum. Memorie Urban proposes a new way of doing tourism and the team behind it began recognising 25th November in their project with this piece in 2013. This specific mural is in the city of Formia. It shows rows of women holding a banner with hundreds of tally marks, highlighting the number of women who have been subjected to violence, both inside and outside of slavery. The women and the banner wrap around a column on three faces. When these faces are put together (as in the first picture above) they form the continuous line of women and tallies.