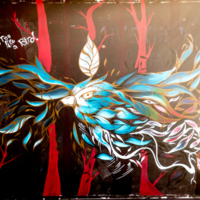 Because I am a Girl (Free As A Bird)

In 2015, the team behind Femme Fierce (the World's Largest All Female Graffiti Street Festival) worked with Women of the World (WOW) and Plan International UK to create a series of murals against forced marriage. Over 150 female street artists took to the graffiti tunnel on Leake Street in Waterloo to support Plan UK’s fight against child and forced marriage. This project was part of Plan International’s worldwide campaign ‘Because I am a Girl’. The walls were painted blue to reflect Plan’s logo and then the female artists let their imagination run wild, painting their interpretations of ‘Because I am a Girl’.Plan International, which works to protect the rights of children, launched this campaign to fight for girls’ rights and gender equality. It is a youth-led, global movement that supports girls to take the lead and influence decisions that matter to them. The charity works on forced and child marriage throughout the world.This mural was created by Fio Silva and depicts a bird escaping from the confines of the home to spread her wings in life.